Thoughts on Star Trek: Into Darkness 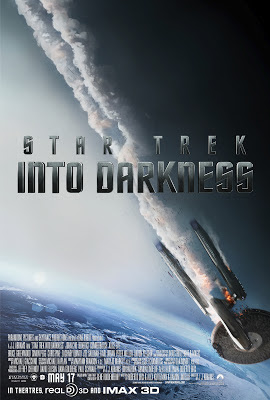 Nervous Trekkie
I own much of the epic saga, including the forgotten animated series. I still haven't purchased Voyager. Some day, I'll own it all, but this isn't the United Federation of Planets. We still have to use currency to function. In comparison to others I'm a modest Trekkie. Yes, I own an Original Series Communicator, a Next Generation era Combadge, Vulcan ears (thanks Chet, for both of those), and a very tight Original Series command gold uniform. I once gave a girl I liked a Tribble for Valentine's Day. I know, romantic. But for a Trekkie, what could make for a better gift to a girl than a cute, cuddly Tribble?

As a lover of Star Trek, I was very nervous when J.J. Abram's Trek resurrection hit the big screen in 2009. I was afraid he would butcher it. He didn't. The movie didn't disappoint, but elements of it annoyed me. Star Trek has never been about mindless action. If you want that, grab a lightsaber and head on over to a galaxy far, far away. Star Trek has always been about characters, about story, and about what it means to be human. Abrams' Trek upped the action to draw a new crowd of Trek fans and kept enough of the DNA of Trek to keep us purists happy. It was a success.

With Star Trek: Into Darkness, I was once again very nervous. I finally watched it today and below are some thoughts I had about the movie:

Klingons
When the picture leaked revealing Klingons in Into Darkness, I was ecstatic.  Next to the Romulans, the Klingon Empire was the greatest enemy of the Federation. Kirk absolutely hated them (see ST III: The Search for Spock, ST VI: The Undiscovered Country). With Into Darkness taking place in time of the Original Series, I thought the Klingons would play a huge role in the movie. Though they are essential to the plot of the movie, they didn't get much screen time. J.J. Abrams, you got me excited to see Klingons and you let me down. To you, I say "Hab SoSlI' Quch!"

Spock/Uhura Love
This annoyed me the most about 2009's Star Trek. Into Darkness, continued this annoyance  There is just something wrong about Spock and Uhura being a couple. I can't accept it. Kirk scandalously kissing Uhura in a mirror universe is great. He is Kirk, more power to him. But Spock locking lips with Uhura, that is just wrong. Which brings me to Uhura. I love the Original Series' Uhura. She is sassy and classy. She actually manned her station. Nichelle Nichols was and WILL ALWAYS BE Uhura. Zoe Saldana's Uhura is so annoying! She is worse than Wesley Crusher and even worse than Lwaxana Troi! I could  not handle seeing her on the screen. This Uhura, the ship's communication officer, thinks she is some sort of warrior. I was hoping a Bat'leth would swipe off her head ending my pain. No such grace came. Even in one of the movie's most climactic scenes, the showdown between Spock and Khan, Uhura shows up, with a phaser. Why!? In the next chapter of Star Trek, I hope Uhura goes on a landing party and has an unsuccessful showdown with a Gorn. She is already wearing the right color.

Characters
With the exception of the Spock/Uhura love mess, and with the above noted Uhura annoyance altogether, this new set of actors really seem to be settling into their roles. And those are some big go-go boots to fill. Chris Pine does a great job with Kirk. He is charming, he is reckless, and he is a womanizer. For our good captain, human or Orion or cat creature, it doesn't matter. He is an equal species user. He will never be William Shatner, but he does an acceptable job. Zachary Quinto makes for an excellent Spock. Again, like Kirk, however, Leonard Nimoy will always be the Vulcan legend. Sulu, Chekov and Scotty have all done well in their portrayals of their respective characters. Carol Marcus was perfect. This new, improved, beautiful and British (wolf howl) Carol Marcus is a favorite of mine from the new film. My heart will always be with T'Pol, but this Marcus is just excellent.Benedict Cumberbatch did well as Kirk's greatest nemesis: Khan. He was fierce and merciless. Hopefully, Into Darkness was not that last time we have seen Khan.  The most impressive character portrayal was Karl Urban's Leonard "Bones" McCoy. Of all of the actors, I believe that Urban has absolutely mastered McCoy. It was fun to see Bones on the big screen.

The Story
Star Trek movies have always mirrored the times they were released in. The prime example of this would be Star Trek VI: The Undiscovered Country. The Federation's tense relationship with a crumbling Klingon Empire was relevant to the closing days of the Cold War Era. In this way, Into Darkness continues this Trek legacy. Our present day is indeed dark. The threat of terrorism is real. Into Darkness picks up on these themes. The rebirth of Khan was predictable but not entirely a bad thing. Star Trek II: The Wrath of Khan is still the greatest Star Trek movie ever made, but Into Darkness makes for an acceptable tribute to it. It's a companion to The Wrath of Khan, not a replacement.

Did I mention Carol Marcus? She was stunning. In all seriousness, it was a good movie. The story was captivating. The special effects were incredible. "Bones" was flawless. Spock had an incredible showdown with Khan.  Kirk grew as both captain and as a man. What I loved the most about Into Darkness, however, was the excitement I saw in the eyes of my ten year old cousin, Isaiah. At the end of the movie, he was craving for more Star Trek. Star Trek and Star Trek: Into Darkness has brought Star Trek back to relevance. It has introduced the next generation to the Final Frontier. That is something I can be excited about.