Exposure to Exposition
Mark Minnick is a premier expositor of Scripture. In my estimation, the seminary professor and pastor, is on the same level as John MacArthur in his ability to articulate the truth of a text . Besides John MacArthur, and my own pastor Dan Mauldin, no one pastor has shaped my philosophy of preaching more than Mark Minnick. I highly esteem this man. He is one of the kindest professors I've ever had. During my undergrad years, I attended Mount Calvary. It was essential to my preaching development. When I came to BJU as an ignorant freshman, I wanted passion and excitement from preachers. Deep down, though I never vocalized it, I thought that real preaching was the gusto of evangelists. That was powerful preaching. As I matured in my thinking, however, I saw that the power of preaching was not the preacher, it was the Word of God, itself. Real preaching is not macho gusto. Real preaching is faithful explanation of the Scripture. The Word of God is the power. Which is why Bible exposition (explanation) is so vital. The preacher acts as the mouthpiece, the messenger, the herald of the King. It is not his job to create the message. His job is to proclaim the message.

My understanding of preaching as exposition, and my love for Bible explanation grew under Kerry McGonigal in Homiletics, called "Pulpit Speech" in those days.  With McGonigal in the classroom, John Piper and John MacArthur on the iPod, I was being exposed to excellent preaching philosophy, reading superb preaching texts, and hearing some of the finest preaching available. It was in the middle of this expository preaching immersion, that I first began to attend Mount Calvary Baptist Church, but for less than stellar motives. The reason I attended my first Sunday was that I was faced with a dilemma. The Dallas Cowboys were hosting the New York Giants for the divisional round of the NFC playoffs. The game began on Sunday night when I would normally be in church. Mount Calvary offered an early service, so it was to Mount Calvary I went. What I discovered there astounded me. Here was eloquent, clear, exposition of Scripture. In case you're wondering, the Cowboys lost tragically that night. I was at Mount Calvary every Sunday thereafter. I was hooked. I wanted my preaching to be like his. I honestly believe that central to my homiletical education was weekly exposure to Mark Minnick's exposition of Scripture.

Getting Pwned
Fast forward a couple of years to present day. I'm in an incredible course taught by Dr. Minnick, "Exposition of Paul's Shorter Epistles." Our final assignment is a sermon on one of two controversial passages: 1 Timothy 2:9-15 or 1 Timothy 5:11-15. I picked 2:9-15.  In all the busyness of semester's end, I was starting to feel the pressure of getting all of my major projects done. The sermon was going well and I was making pretty good time. Everything was going my way, until I came across the final three verses of the passage:


For Adam was formed first, then Eve; and Adam was not deceived, but the woman was deceived and became a transgressor. Yet she will be saved through childbearing—if they continue in faith and love and holiness, with self-control.

It was getting late and I was exhausted. Not right now, I don't need this, I thought.  I didn't have time to research this and find out what these confusing three verses meant. So I wrote the following explanation:


Paul is clearly not arguing for salvation by child birth. If that were the case he would be contradicting his other teaching of salvation by grace alone (Eph. 2:8-9). This is a difficult passage to understand. "Whatever it means to be 'saved through childbearing'," Mounce comments, "this salvation must be accompanied by faith, love, holiness and modesty. The of salvation in the [Pastoral Epistles] is fully Pauline. Salvation is through God's grace and mercy, appropriated by believers through faith" (Mounce, 143-144).

I was feeling pretty good about my ambiguous explanation.  Mounce was the expert, after all, and he didn't have a straightforward answer. So I quoted the expert, printed the sermon and called it a night.

When I got my sermon returned to me, I saw that Dr. Minnick had written this in the column next to the explanation I gave for vss. 13-15: 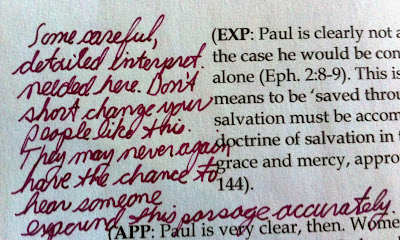 If you can't read the fancy handwriting in this quality iPhone 4 picture, this is what he wrote:

Some careful, detailed interpret. needed here. Don't short change your people like this. They may never again have the chance to hear someone expound this passage accurately.

Pastoral Care
"Short change your people,"ouch! Josh, I thought, you just got pwned! Didn't Dr. Minnick understand that the expert Mounce didn't even have an explanation? Didn't Dr. Minnick know that I was very busy and didn't have time to research this?

And that's when it hit me. He was absolutely right. If, as pastor, I gave this as an explanation for this verse that was not only short changing my people, that was pastoral malpractice! As heralds of the King, our job is to care for the flock of God (1 Pet. 5:2). Essential to shepherding God's people is the exposition of the Scripture. Because, after all, the Word of God is the power through which the Holy Spirit works. It is through the foolishness of preaching that God works in the souls of people (1 Cor. 1:18-31).

Expository preaching is essential to proper pastoral care. In the pressure of pressing assignments and fatigue I took a short cut and I was wrong. I have no doubt that in the ministry, short cutting research and study is a temptation. In Utopia, pastors probably have 30-40 hours to prepare sermons. But, here, in the real world pastors are hard pressed with other obligations. Counseling, caring for the sick, cleaning toilets-a pastor is a man who wears many hats and is pulled in a thousand different directions. It may very well be that in the ministry, sermon prep can fall to frantic, late Saturday nights.  But, we cannot take shortcuts. We must study and dig deep until we understand the meaning of the text.

I recently talked to a man who expressed to me his annoyance at how his pastor will occasionally say, "now, we don't have time to turn here" when developing a point. "That's why we're here, pastor," he said, "take the time, teach us." Last winter, I was preaching and apologized to the congregation that I took so long to develop a point. After the sermon a man I greatly respect said, "Josh, you did a great job, but one thing: don't apologize for taking time to explain. That's what we're here for."

The people of God crave clear teaching, even if it takes time to work through a paragraph, chapter or book, line by line. Jesus, Himself the great expositor, "beginning with Moses and all the Prophets, he interpreted to them in all the Scriptures the things concerning himself" (Lk. 24:27). The church is craving Bible exposition. They don't need a pastor's opinion about this or that. They don't need his own spiritual convictions forced on them or his creative applications to their lives. They need clear, simple, explanation of the meaning of the text. They don't need ambiguous language given by New Testament scholars. They don't need their pastors to take shortcuts, even if the pastors are pressed and exhausted. In preaching, anything less than clear, detailed, explanation of a text is short changing our people.

In spite of my lazy explanation of those three verses, Dr. Minnick gave me a B+ for the sermon. With his  comment, I got pwned by Minnick. Graciously, of course. And I'm glad he did. My preaching will be better for it.
Topics Mark Minnick Pastoral Theology Preaching