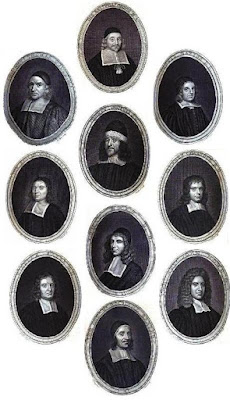 This week is the first ever Puritan Conference at Grace Community Church. This conference was first announced a few years ago. To say I’m excited about it is an understatement. I love the Puritans. I found them to be faithful companions in the soul’s dark of night. They understood suffering, pain, and pastoral ministry. Again and again, they point us to Christ, wherein we draw living water for our soul’s nourishment. I cannot wait for this conference. With my mind on a polluted skyline, endless In-N-Out Burgers, and John Flavel, I thought it an appropriate time to encourage you to read the Puritans.

The story of the Reformation in England is one of political intrigue, turbulence, triumph, defeat and bloodshed. Following the Protestant progress under Henry VIII and Edward VI, Catholicism returned when Lady Jane Gray’s nine day reign was cut short by Bloody Mary. With her return, Protestants were  ushered to the stake to be burned alive. Many fled the country and found refuge in Calvin’s Geneva. Following her death, Elizabeth became queen, and those exiled in Switzerland came back to England with a protestant fury. Elizabeth, while Protestant, sought to unite a fractured country. Her Act of Settlement made the Anglican Church basically Catholic in polity and liturgy while retaining a Protestant theology. Thus, Puritanism was born.

Historian David D. Hall describes essential Puritanism, ”The authority of the word, or regulative principle, the gift of grace from a merciful God, the imperative of eliminating idolatry, and the special liberty Christians would enjoy within the fellowship of a purified church-these themes were shared by everyone who turned away from Catholicism and became Protestants…these same motifs defined the movement that became known as Puritanism"1

The Puritans desired to rid the church of anything that smacked of Catholicism. Pastors no longer wore vestments, churches were stripped of art and other religious adornments, and the sacramental table was moved to side so that the pulpit could be centralized. Puritan worship focused on the word of God read, sang, and preached. They were broadly Reformed, doctrinally devotional, centered on justification by faith alone in Christ alone through grace alone, and concerned with experiential, personal holiness.

Following Elizabeth, James VI took the crown. With a Scottish Presbyterian on the throne, the Puritans were eager about the prospect of finally reforming the church. What they wanted was reform, what they got was a new translation of the Bible. Additionally, James demanded conformity just as strongly as Elizabeth. This led some Puritans and Separatists to set sail to the New World to build a New England and a New Jerusalem. We know them as the Pilgrims.

Following James’ disappointing reign, the country broke into civil war with Charles I. During this chaotic period, one hundred Puritan theologian-pastors and leaders gathered together and produced the Westminster Confession along with the Larger and Shorter Catechisms--doctrinal standards for Puritan and Presbyterian theologies ever since.

Charles was beheaded and the monarchy ceased with the installation of Oliver Cromwell as Lord Protector. With Cromwell, the Puritans found a political ally and here they didn't navigate wisely. The English people wanted a return to the monarchy, so with Cromwell's death, Charles II ascended the throne. He went hard after the Puritans, reinstating an episcopal government, and forcing pastors to conform to the prayer book. Some two thousand of them refused and were ejected from their pulpits--forced to preach and teach illegally. Non-Anglican religious gatherings outside of five people were outlawed, and so over the next two decades many Puritans were persecuted and imprisoned.

With this Great Ejection of 1662, Puritanism as a movement came to a close. The puritans failed to reform the church. The Anglican church would remain in this compromised state.

Puritanism was the reformation of the Reformation. The spirit of Puritanism carries on to the present day. The Puritan legacy was carried on through the likes of Jonathan Edwards in America, and J.C. Ryle, Charles Spurgeon, Martyn-Lloyd Jones in England. Contemporary "Puritans" would be Anglican J.I. Packer who valiantly, but tragically failed to reform his church, and John MacArthur who continues to fight for the Gospel clarity in a confused age.

If you are an American, you are what you are, in part, because the Pilgrims comprised of Puritans, Separatists crossed the sea in pursuit of ushering in the Kingdom of God. If you are Presbyterian, your theological convictions were articulated by Westminster Standards. If you’re a Baptist, you are a direct result of Puritanism that gave birth to separatism which gave us Baptist. The 1689 Baptist Confession of Faith is really just the Westminster, immersed. If you’re "non-denominational" you’re a Baptist and you just don’t know it.

More than country or denominational identity, however, the Puritans are useful for your own soul. Historically, the Puritans were reformers of the Reformation. Now, they serve as reformers of the heart. You will be hard pressed to find works more enjoyable, thoughtful, and spiritually rich than the puritans. J.I. Packer 1 has rightly described them:

The Puritans exemplified maturity; we don't. We are spiritual dwarfs. A much-travelled leader, a native American (be it said), has declared that he finds North American Protestantism, man-centered, manipulative, success-oriented, self-indulgent and sentimental, as it blatantly is, to be 3,000 miles wide and half an inch deep. The Puritans, by contrast, as a body were giants. They were great souls serving a great God. In them clear-headed passion and warmhearted compassion combined. Visionary and practical, idealistic and realistic too, goal-oriented and methodical, they were great believers, great hopers, great doers, and great sufferers. But their sufferings, both sides of the ocean (in old England from the authorities and in New England from the elements), seasoned and ripened them till they gained a stature that was nothing short of heroic. Ease and luxury, such as our affluence brings us today, do not make for maturity; hardship and struggle however do, and the Puritans' battles against the spiritual and climatic wildernesses in which God set them produced a virility of character, undaunted and unsinkable, rising above discouragement and fears, for which the true precedents and models are men like Moses, and Nehemiah, and Peter after Pentecost, and the apostle Paul.

Where Do I Begin?

The first Puritan work I read from cover to cover was John Owen’s The Mortification of Sin. Here, you’ll find his exposition of Romans 8:13, “If ye live after the flesh, ye shall die: but if ye through the Spirit do mortify the deeds of the body, ye shall live’. The Mortification of Sin has his famous line, “Be killing sin or sin will be killing you.” Owen is notoriously difficult to read. Be sure that you grab Banner of Truth’s Puritan Paperbacks edition where the language has been lightly updated, and punctuation added. Banner of Truth has also published an abridgment of Owen’s Communion with God which you’ll also want to consult.

Another potential place to begin, is John Flavel’s Keeping the Heart. Proverbs 4:23 is the starting place: “keep thy heart with all diligence for out of it are the issues of life.” Flavel unpacks all the ways to do just that. You may also look at Jeremiah Burrough’s The Rare Jewel of Christian Contentment where you’ll see Christ more satisfying than life. Thomas Brooks’ Precious Remedies Against Satan’s Devices is a delightful and insightful read in understanding temptation. Richard Sibbes’ The Bruised Reed will balm your wounds, and Thomas Goodwin’s The Heart of Christ will incite wonder at your savior’s love.

More theologically inclined readers would enjoy John Flavel’s The Mystery of Providence (the standard work in print on the subject), or Thomas Watson’s systematic theology, A Body of Divinity. Stephen Charnock’s The Existence and Attributes of God will expand your head and heart as you ponder God’s nature and character.

For pastors, the best place to begin is Richard Baxter’s The Reformed Pastor. I first read this work in the Mack Library at Bob Jones University as an undergraduate student. In the years of ministry, I returned to this work often, striving to watch over my own soul and those God has placed under my care. Congregants who want to be better church members should look to John Owen’s Duties of Christian Fellowship.

Lastly, The Valley of Vision: A Collection of Puritan Prayers and Devotions, is a valuable tool. I read and pray these prayers daily with my Bible reading. I’ve found them both stirring and shaping—warming my heart and modeling prayer.

If I were to pick three of the above works for you as a reader, I would start with Precious Remedies Against Satan’s Devices, Keeping the Heart, and The Valley of Vision.

Read the Puritans. In their writings, you will be challenged and comforted. Your heart will be stirred to love God more and to serve him more faithfully. These are treasures for us to mine!